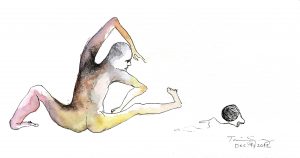 Seven years is both an eternity and the blink of an eye where the death of one’s child is concerned. Having witnessed firsthand all of the events that led to Talia’s coma and death, it has taken us—Talia’s parents—some time to gather ourselves. That “gathering” process has been fraught, the magnitude and enormity of the ride unlike any experience we’ve ever known, including the birth and adoption of our children, the deaths of loved ones, the illnesses and injuries various family members have battled. The scars from Talia’s death are real. Where our parents’ deaths feel ordered and acceptable (if sad), the wounds concerning Talia’s death do not heal, the damage is permanent. And the loss—the agonizing fact that Talia, who died needlessly, is no longer living, that she will never bubble with enthusiasm about a deep conversation, hug us tightly before heading out the door, produce another unique piece art, or have children to carry on the “Talia” line—that loss is forever.

In February 2017, the Seattle Times published Mike Baker’s article about Talia, “A Lost Voice,” which ultimately changed the trajectory of our lives. After its publication, we received emails every day from people all over the country. One set of people—patients—identified deeply with Talia and what happened to her. Many reported similar circumstances, with complications that arose when their providers did not listen. Some had loved ones who had died, others survived but suffered terrible complications. Another set of people we heard from worked in healthcare. They were nurses and doctors who wrote to us confirming what we already knew, that there are problems in most hospitals that must be addressed if every patient is to remain safe. Often they wrote to say they were rededicating themselves to being better advocates for their patients.

The dozens and dozens of emails we received helped us feel connected to others, but they weighed heavily on us, knowing that versions of our experience with Talia were being played out in hospitals everywhere.

While we were grappling with the seeming impossibility of medical care changing to become more patient-focussed, we were contacted by the COO of Marin General Hospital, who had some ideas. MGH had embarked on a multi-year program aimed at continuously improving patient care and safety at their hospital. As part of Marin’s commitment to that goal, Jon Friedenberg told us about the many things MGH is doing to become a safer hospital and invited us to Marin to tell Talia’s story.

Although Marin General is exploring and implementing programs of their own to improve patient safety at their hospital, they wanted to hear our story, absorb it, and then address the problems we identified. We learned that how they operate as an institution is in stark contrast to Talia’s hospital experience. It was gratifying to participate in their efforts; but it really made us ponder what role we could play in helping other hospitals become safer.

Hospitals and providers of healthcare need to address patient safety and change current practices, and since hospitals everywhere are struggling with a culture that is often not “patient centered,” we realized that if we could also begin to address students in medical and nursing schools before they entered the field as practitioners, we had a chance of playing a role in changing the culture in medicine. This would be the preventive side of our efforts.

And so we set off on a journey to change the culture in medicine to make it safer for patients. We are keenly aware of the shifts in medical schools right now, in their efforts to address the “art” of medicine, not just the science. But how we change the pervasive culture of medicine is an open question, and one we will pursue in our efforts to make patients safe.  We feel an obligation to help stop harm and death that results from medical error, particularly as it relates to communication and listening.