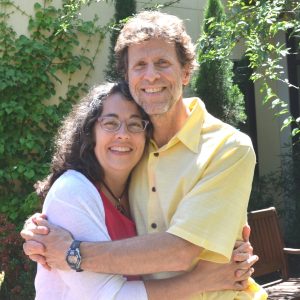 Dr. Jeff Goldenberg and Naomi Kirtner met while working at summer camp. They were married in 1985 and moved to Eugene, Oregon in 1990, where they raised all six of their children: Raya and Talia, who were born to them; Jaclyn and Adie, who came into the family after their mother committed suicide when they were 8 and 10; and Abi and Tsion, who were 10 and 7 when they were adopted from an orphanage in Ethiopia. Their three oldest living children now reside in Portland, Oregon, where they are employed in education. The two youngest kids attend high school in Eugene.

Up until Talia’s death, Jeff worked full time as a busy family doctor where he enjoyed caring for patients of all ages with a variety of medical problems. (He still thinks about and misses his patients every day.) Naomi completed a master’s program in Counseling Psychology and has spent most of her time since as a busy stay-at-home mom raising a large and noisy family. She enjoyed teaching classes and volunteering in the schools and taught preschool for a number of years.