Talia’s Voice Has a New Logo!!

Some of you may have noticed the new logo that came out with our fall newsletter. We are pretty excited about it—handing out a business card just feels different with a logo that includes our girl on it! It was a team effort all the way around. Talia’s sister, Raya, really helped us hone in on what message we wanted to convey through the logo, and then came up with the idea of having Talia herself be the voice—even if that’s what she was denied in life. Niki Tomita, Talia’s good friend from Carleton College, was so helpful and calm as she worked closely with us to refine and contextualize this image of Talia speaking out and into the world, even now, from death. This logo is theirs as much as ours. Our dear friend Jane Gibbons acted as our visual arts consultant (which she has done so many times going all the way back to Talia’s first art exhibit that we now just consider her our personal artistic director). And Tracy Klocko, a local graphic designer, patiently walked us through final design and color options for getting the logo onto paper. I was surprised to learn that, even with modern technology, certain colors—like blues and vibrant periwinkle, for example—are difficult to print on paper or only come in a limited range of tones. Tracy, like Niki, never got defensive or expressed frustration about my pickiness and perfectionism.

In an interesting moment while we were experimenting with the circle—which I variously refer to as the circle of life, the world, a hula hoop, and a circus ring—Niki tried importing the actual photo of Talia that 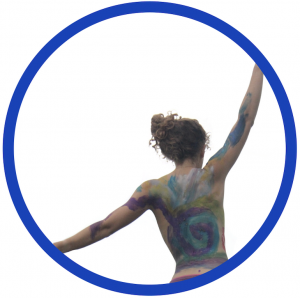 this logo image is based on. But in the original photo of Talia—with her body painted, arms outstretched, gloriously open to the world—her hands are cut off at the edges. So when Niki placed the image of Talia in the ring, there were no hands to anchor her “here” on this side. It was a very freaky moment of seeing Talia slipping into the void. When Niki added in hands, it was beautiful (and bittersweet) to see Talia anchored on both sides of the divide, “here” and “not-here;” or not-here at all but still making her voice heard here. (Who knew just a pair of hands on a ring could have that effect?)

I love how Niki used shapes she pulled from Talia’s abstract art and journals to create Talia’s French braid. I was always partial to Talia’s hair worn this way, and am so glad Niki could give her a braid, even if the level of detail is unusual in logos. I love the curly wisps of hair—and don’t care that they will not be easily visible when the image size is reduced for things like business cards. Real life wispies are like that, too, only apparent when you are right up close. I love how Talia looks poised to hop on that circus ring, with those strong arms, and do a few gymnastics tricks like she did way back when. I love how we see her from behind as she looks out, surveying the scene before her. I wonder what she sees. Is she reflective about her life and what went wrong in her medical care? Is she seeing the pervasive problems in medicine today and formulating how to solve them? Is she shouting at the top of her lungs to move people to listen? Is she reviewing her past, shouting at the top of her lungs in rage that her care providers abandoned her? Or is that all behind her and here she is looking at death as it approaches, speaking up as she did in the hospital to try to keep herself on the living side, but to no avail—making her image here a reminder to us all of what can happen when our voices aren’t heeded?

We told my friend Daniel all these thoughts about our logo—Daniel, who with his wife Leslie looked after all our living kids with love and devotion when they came to Seattle to say good-bye to their beloved sister; Daniel, who has quietly supported us through friendship and over food when we have been in Seattle for Talia’s Voice work. When he asked if he could share what he sees in this image, he blew me away. “To me,” Daniel said, tearing up, “It looks like Talia is opening her airway.” Jeff, awed, noted that this really is how it looks as you insert a laryngoscope and visualize the airway when about to intubate someone. I am struck by the power of this image, of Talia using her own arms and body to physically force open that swelling shut airway, as if to say, “If you guys won’t do your job, I’ll just have to do it myself; even from death I’ll open it to let my voice ring out and be heard.” In 2017, The Seattle Times did an extraordinary job using Talia’s art in Mike Baker’s feature, “A Lost Voice.” I often remark that Talia is the only person I know to illustrate, from the grave, her own demise. While I would be the first to scream that her voice is what her providers stole, I also think the symbolism of Talia opening her own airway so she can continue to be heard—that’s profound. That girl had a lot of power in life, and I am seeing that she does in death, too.

Whatever you see in our logo, I hope it’s an image that sticks with you, and that it does what a logo should do: create an association of this image of Talia with our organization—or, put another, business-minded way, that the logo becomes a form of “brand recognition.” It’s an unconventional logo to be sure, and that makes me smile, because Talia’s entire relationship to the visual arts was outside the box. And how she lived and died was, too.