During Talia’s competitive soccer days, one nemesis was a team named the Strikers. But today we lined Talia up with, instead of against, the Strikers. Nurses from Swedish Hospital—where Talia died—are on strike to get Safe Staffing, to put Patients Before Profits, and they are United for Patient Safety. It goes without saying that we have a complicated relationship with Swedish. Obviously, there is almost nothing as intimate as a shared death—meaning we will be “in relationship” with Swedish forever, even if they remain a frustratingly silent partner to this point. But there is nothing complicated about standing with, standing by, standing for, people whose desire is to put patients FIRST. And that’s the whole reason for the strike. ​

Yesterday afternoon, Talia’s good friend Niki Tomita was sitting at work when the Swedish Strikers passed by on their way 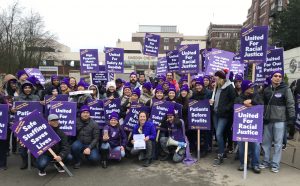 to a rally. Niki looked out the window and saw a huge number of people, all from Swedish, carrying signs that read, “Patients Before Profits”—and she started to cry. Amazed, stunned that these were Swedish folks from the place Talia died, she ran out to join the rally, and sent me a text with photos. (It was impossible to miss her excitement.)

​​Jeff and I had been following the story from here in Eugene. We knew a strike was planned for this week, that the nurses and other staff have been in negotiations for 10 months to no avail, that their demands for safer staffing numbers and safer equipment have not yet been met (nor have their demands for better wages). But until last night, we were kind of watching from a distance. Trauma does that to you—you put up walls and then take information in spottily, haphazardly, or only “kinda sorta.” And perhaps we were keeping our distance, too, knowing how bitterly we feel towards Swedish for never yet taking initiative to apologize to us, for never taking proper responsibility for Talia’s death or their actions with regard to it and supposed investigations into it afterwards. ​​

Yet suddenly we found ourselves moved to connect with nurses and other workers from Swedish — they too believe in patient-centered care and elevating the patient’s voice. From there things moved fast. Jeff ordered dozens of donuts last 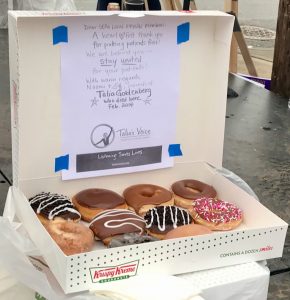 night and spoke to a union representative to find out where we could to deliver the donuts for members of SEIU Local 1199 NW on the picket lines. It was sweet (and sad) listening to him sharing Talia’s story with her over the phone. Niki offered to deliver the donuts, and agreed (brave soul!) to be our spokesperson, even though public speaking is scary! We emailed Niki a note to print and tape to the donut boxes, then sent her our message to be conveyed to the Strikers.

​​It’s so interesting to see how these moments pull people together. Niki’s mom just moved to Seattle, and she offered to be the chauffeur and photographer, and now she’s posted photos on her FaceBook page—although we’ve never met. Niki called afterward and was all abuzz—she had heard from us about, but had never experienced herself, the way Talia is known to the Seattle medical community. The cheering crowd was warm and welcoming, and took a photo with her, and then people came up to visit with her afterwards (and with her mom, who didn’t even know Talia!). One nurse told Niki she was at Cherry Hill when Talia died, not as Talia’s nurse but there, which kind of knocked Niki’s socks off.​​

We generally support workers and unions, and certainly believe in supporting any and all healthcare workers who are pushing their leadership to put patients first. (And paying your staff well is one ethical way to do that.) What was interesting to us about this is that it’s the first time we’ve felt generous towards anyone who is associated with Swedish. For better and for worse, just saying the name “Swedish” amps me up and drags me down. It’s associated with everything ugly, and nothing good. Our daughter died there because they failed to take care of her properly. But here are these nurses standing up for patients like our Talia. Hearing about them kind of kicked us into gear, pushed us to act and to be generous towards them. I often say connecting—human connection—is the only way through the darkness. It felt good to stand together for patient safety, in memory of our girl. ​​

Be sure to watch Niki addressing the nurses—it’s really something!​

The support from our community is overwhelming, but none so much as Talia Goldenberg’s family. This morning they joined us on the picket lines with doughnuts and coffee. They support our strike for safe staffing, and putting patients before profits. Thank you, Talia's Voice: Projects for Patient Safety 💜💜💜